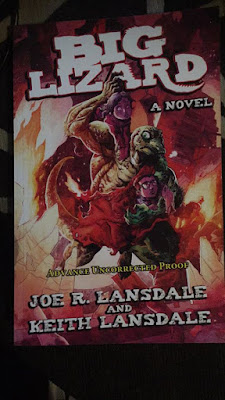 Looking back to when I started this blog, I'm surprised I've not reviewed a Joe R Lansdale book yet.  He's one of those authors who's so prolific it's pointless trying to catch up, so I try to get through one or two of his a year, in which time he puts out at least three.  He's like Stephen King in that regard.

He's also like Stephen King in that, despite an enormously large output, his quality never seems to dip. In fact he's a slight improvement on King in that regard since there are at least two King novels I don't want to read again, whereas, given the time, I would happily reread everything I've read by Lansdale.

This book is two Lansdale's for the price of one. Keith is Joe's son and has recently taken up the mantle on the Red Range comics/graphic novels created by his dad many moons ago.

Buster Nix takes on a job as night security for Pick a Chicken, a local chicken joint where the patrons can, erm... pick their own chickens for their dinner, in much the same way as seafood places allow patrons to pick their own lobster from a tank.  In Pick-a-Chicken they can even despatch their own chicken with a company hatchet before it is cooked.

He stumbles onto a satanic ritual in an outbuilding a few days into the job and knocks over a blazing brazier, disrupting the service and letting all kinds of hell  loose.  As a result of the botched ritual, he finds he has the ability to transform into a Big Lizard (about 8 foot nose to tail).

The owner of the business, Elroy Cuzzins has been similarly transformed by the ritual and has become Big Chicken.  He is hell-bent on completing the ritual, which means killing several people, and it's up to Big Lizard and his friends, a teenage tech wizard and a normal sized but psychic talking chicken called Socrates, to stop Big Chicken in his tracks.

All in all this is as mad as a box of frogs.  There's some very strange but effective visual imagery going on in this book, as well as at least one point where you'll feel real sympathy for Buster.

This book is not going to win any Pulitzer prizes. it's way too much fun for that.  This is probably the funniest book I've read all year.  This is the sort of book to chill out and have a blast with.  And it does that just fine. I laughed out loud several times reading this.  There's no real poetry to the writing, but who needs poetry when you've got an 8 foot chicken on a killing spree?

There are even a few dangling plot threads for a potential sequel to pick up on.  I sincerely hope they're considering it.

This is released in September this year from SST Publications.

Edited to Add
The version of this book that I read was the ARC, pictured above.  I've just recently (aka today) acquired a copy of the full end product complete with illustrations.
It's a gorgeous piece of work.  The illustrations are just as mad as the story. The binding and formatting is spot on.  It's one of those books where the quality of the paper used is so nice it's worthy of a mention.  So I'll mention it.  Even the quality of the paper is noticeably better than most books.
It's signed by Joe and Keith on one of the nicest looking signature pages I've seen (complete with its own set of illustrations). And all this for a lot less than most small presses charge for a high quality signed limited edition.
You need this book in your lives.  It will improve your entire existence. That is no word of a lie.
Posted by Marc's world of Books at 08:15