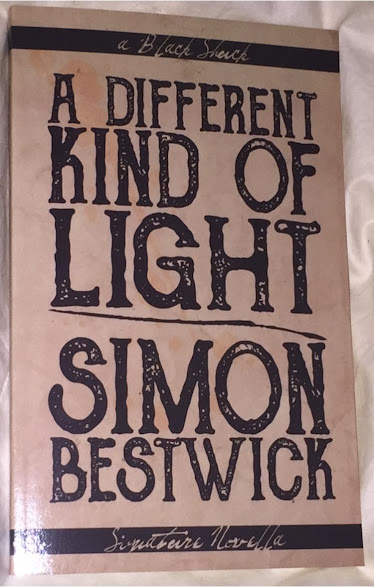 Another Simon Bestwick scoop.  The book launch for this happens tomorrow and this is the ARC I was sent last week.

This has to be the first time that I've reviewed the same writer twice in a week, but Mr B is a twisted guy who keeps himself busy through exorcising his demons by passing them onto us so there's a lot of material there.

In this one we walk the well trodden path of the protagonist discovering an old film and chasing it up to their cost (see Adam Nevill's Last Days, Ramsey Campbell's Grin of the Dark, Theodor Roszak's Flicker, Paul Auster's Book of Illusion etc).

Familiarity is a good thing in this case and certainly doesn't breed contempt.  The monsters contained in this old film are truly nightmarish.

Set in a chaotic and unpleasant near future, the story kicks off when the narrator Ash is asked to authenticate the aforementioned film, footage of a famous crash at Le Mans where dozens of people in the crowd were killed when a car ploughed into the stand. In this particular footage, something can be seen hovering over the dead and dying in the crowd. When the creatures turn to look at the viewers of the film, that's when all hell breaks loose.

This isn't paced as quickly as the Devils novella I read last week.  A large proportion of the story is centred on Ash chasing round the country researching the maker of the film. In lesser hands this could feel like info-dump, but Simon manages to use the search for inormation to build the atmosphere. The more we learn about what happened to the last guy, the worse we know things are getting for poor old Ash. One scene in particular is easily one of the best horror set pirces I've read this year so far.

Ash and Dani are good protagonists and their relationship is a fine emotional backdrop for the story. The chaos and turbulence in the country is never explained, but serves the story nicely.  I'm wondering if it's one of Simon's more cheerful predictions of a post-Brexit Britain 😃

Well worth spending your hard earned cash on, it's available through Black Shuck Books https://blackshuckbooks.co.uk/