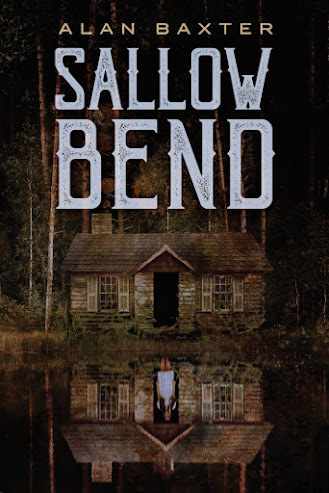 I was sent a review copy of this from Cemetery Dance in exchange for a fair and unbiased review.

I was very happy to be sent this review copy, as regular readers of this blog will know, I think the name Alan Baxter is an assurance of quality and he is one of my current "collect everything I can that he's written" authors. It feels good to be reading his latest before it's officially out.

This book, actually the first full length novel I've read by Baxter, continues the tradition of quality I've seen in his other works.

Nestled in a sweeping curve of the river Sallow, the town of Sallow Bend harbours its own dark secrets.

The carnival has just rolled into town. Two local girls have gone missing. When the girls are found alive and well, the townspeople are jubilant. But what they don't know is that something else has come back to the town with the girls, and it has its own agenda. People start dying, and only one man has any idea of what's happening, but what can he do to stop the rising death rate when no one will believe what he has to say?

In a welcome twist to the traditional tropes, the carnival isn't the source of the troubles; they've just arrived at the same time as an old evil has risen in the town, and they're as likely to die by its hands as any of the townsfolk.

This is a fast paced and occasionally pretty gross horror novel. Despite the presence of so many familiar tropes (small town American setting, ancient evil rising etc) this wrong footed me on several occasions. The way the villain is introduced to the story was brilliantly done and totally unexpected.

At least one character who I assumed to be an unredeemable bad guy turned into one of the most sympathetic characters once we found out why he was the way he was. Even the villain has good reason for her quest for vengeance against the town.

Baxter creates an ever increasing sense of dread and hopelessness throughout. We're never quite certain who will survive. The final confrontation is as tense as any you'll read in a Stephen King novel. (I know I try not to compare horror writers to King because it feels lazy on my part, but again, this shares enough thematic similarities it's almost unavoidable)

I missed the Australian setting of his other books that I've read. The American setting has a more familiar feel to it and therefore less of the weird atmosphere I found in the two Gulp collections. that's only a minor quibble though. My only other quibble is that some of the characters were so well drawn that I wanted them to play a more active role in the story and it was slightly disappointing that they didn't.

There's also some well integrated social messaging that comes across as a natural part of the story rather than preachiness.

The writing is unpretentious and an easy read. Good characters and a refreshing and unpredictable take on some old conventions. The monster is genuinely threatening and almost completely original.

This is a great slice of small town horror. Go out and buy it when it's released. You won't regret it.